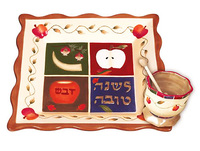 It’s almost cliché to repeat Tevye’s attempt to distill how the Ashkenazi Jews of Fiddler on the Roof—and really Jews as a whole—have “kept their balance” throughout the years, and yet in the case of Rosh Hashanah, the word “Tradition!” rings as loud and true as can be.

We have a way of exaggerating things greatly nowadays, especially when it comes to time—“Oy, the bus took ages to come!” or “The Maple Leafs are taking just ages to rebuild…I’m telling you, it’s hopeless.”

And while it’s been a while since the Toronto area has seen a Stanley Cup winner, as it is currently the year 5775 by the Hebrew Calendar, which governs, among other things, when Rosh Hashanah and all other major Jewish holidays are held, it’s safe to say that Rosh Hashanah has marked “the Jewish New Year” for, well, literally ages. As with any long-running event, there are many traditions associated with Rosh Hashanah, which yourholylandstore.com is happy to guide you through.

Some of the most important Rosh Hashanah traditions include:

These are just a few of the many traditions that go into one of Judaism’s oldest and most prominent holidays.