The menorah is a nine-branch chandelier which is usually lit during the Hanukkah. Eight branches are lit in order to celebrate the eight days of Hanukkah, while the ninth is lit in order to serve on a domestic purpose (to either use its light in the household, or to use it in order to light the other eight branches). The ninth branch is called a ”shamash” and it is customary to have it placed either lower or above the other eight. There are several theories regarding the order in which the eight branches should be lit, as well as on whether the branches should be placed in a horizontal line or in a curve.

Apart from this menorah there is also the seven-branched menorah which was used in the ancient Temple of Jerusalem and is currently considered to be a symbol of Judaism.

In December, before the beginning of Hanukkah, the menorah is usually placed in a public place and it is common for political officials to attend its lightning. For instance, American presidents have been lightening a national menorah since 1979 and since 2001 the White House has been holding every year a Hanukkah party which includes the lightening of a menorah. In the British House of Commons, the menorah is lit at the Palace of Westminster, at the official residence of the Speaker of the House.

Impressive menorahs can be found everywhere in the world, and in some cases, without a direct connection between the symbol and the number of Jews living in the respective country. For instance, the largest menorah is to be found in Manado, Indonesia, where less than 20 Jews live. Other two impressive menorahs are to be found in New York City – one in Brooklyn and one in Manhattan.

Apart from the symbolism carried by the menorah, such an object has become recently a work of art to be found in Judaica stores, richly decorated and made out of different materials. 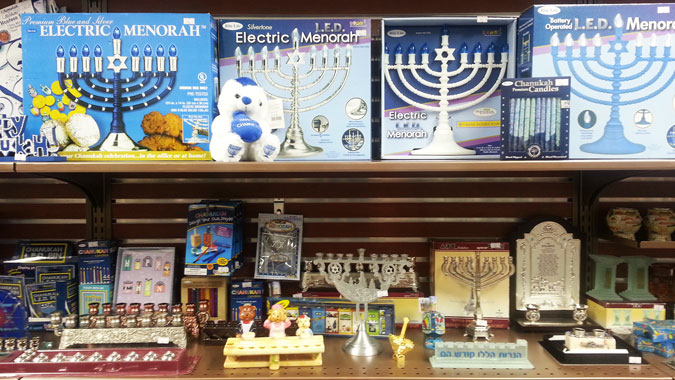